Why is it that the strongest people in the world just so happen to be the nicest, most humble people as well?

Andrey Malanichev and his team of instructor-athletes fit this persona perfectly, and this weekend, HYBRID has the great honor of hosting their powerlifting seminar here in Miami. 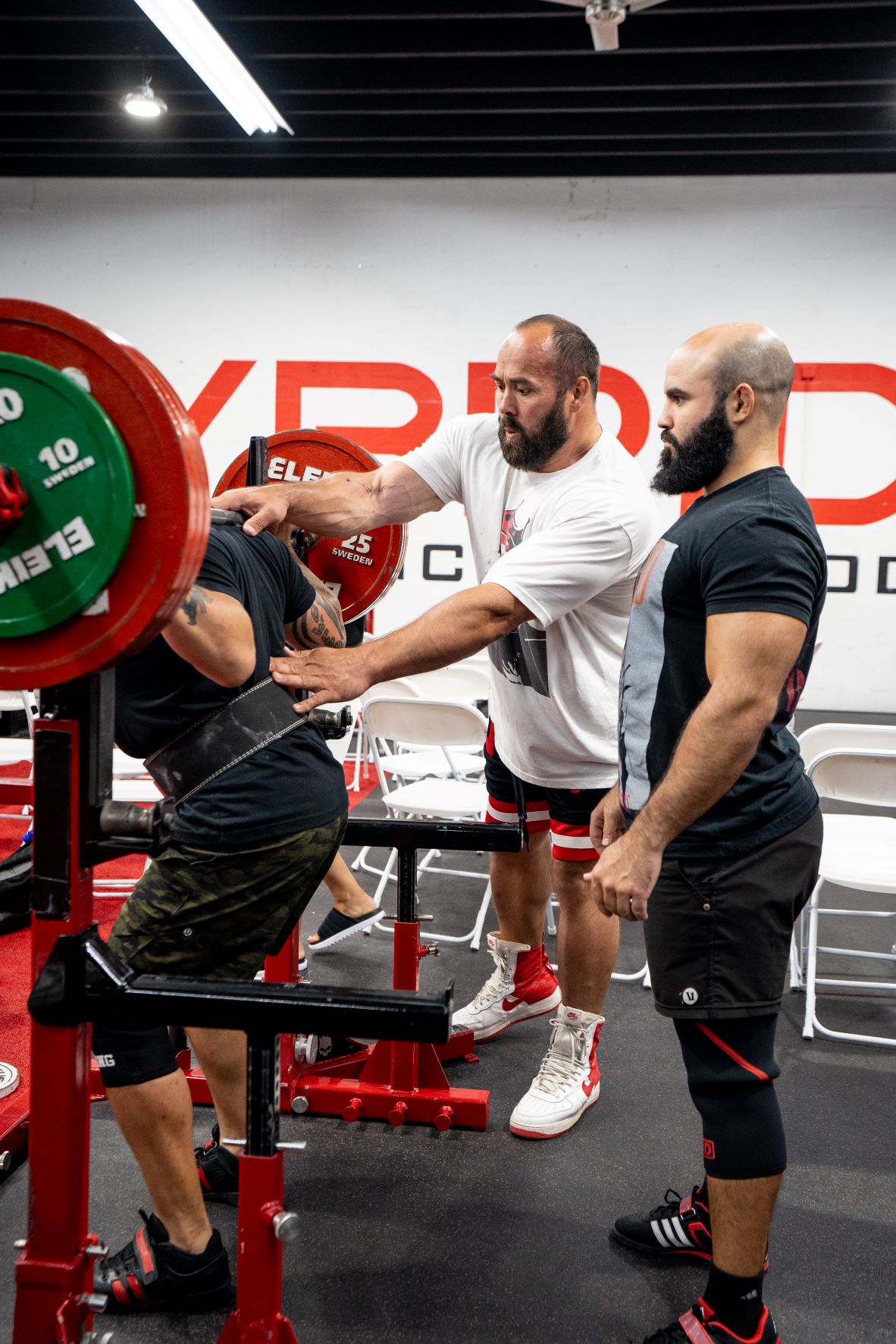 In case you don’t know who he is, Andrey competed at the highest level of powerlifting for 27 years. Hailing from Russia, he set 12 all-time world records in the sport, notably boasting a competition squat of over 1,000 pounds.

I think I speak for all of the attendees when I say it was a once-in-a-lifetime opportunity to get technique feedback from one of the greatest powerlifters of all time.

Don’t worry-- if you missed today’s portion of the seminar, Andrey and his team will be back at HYBRID again tomorrow from 9:00 AM to 12:00 PM to lift, talk shop, and connect with those who want to snag a photo.

In the meantime, here are some of the highlights from today’s seminar! 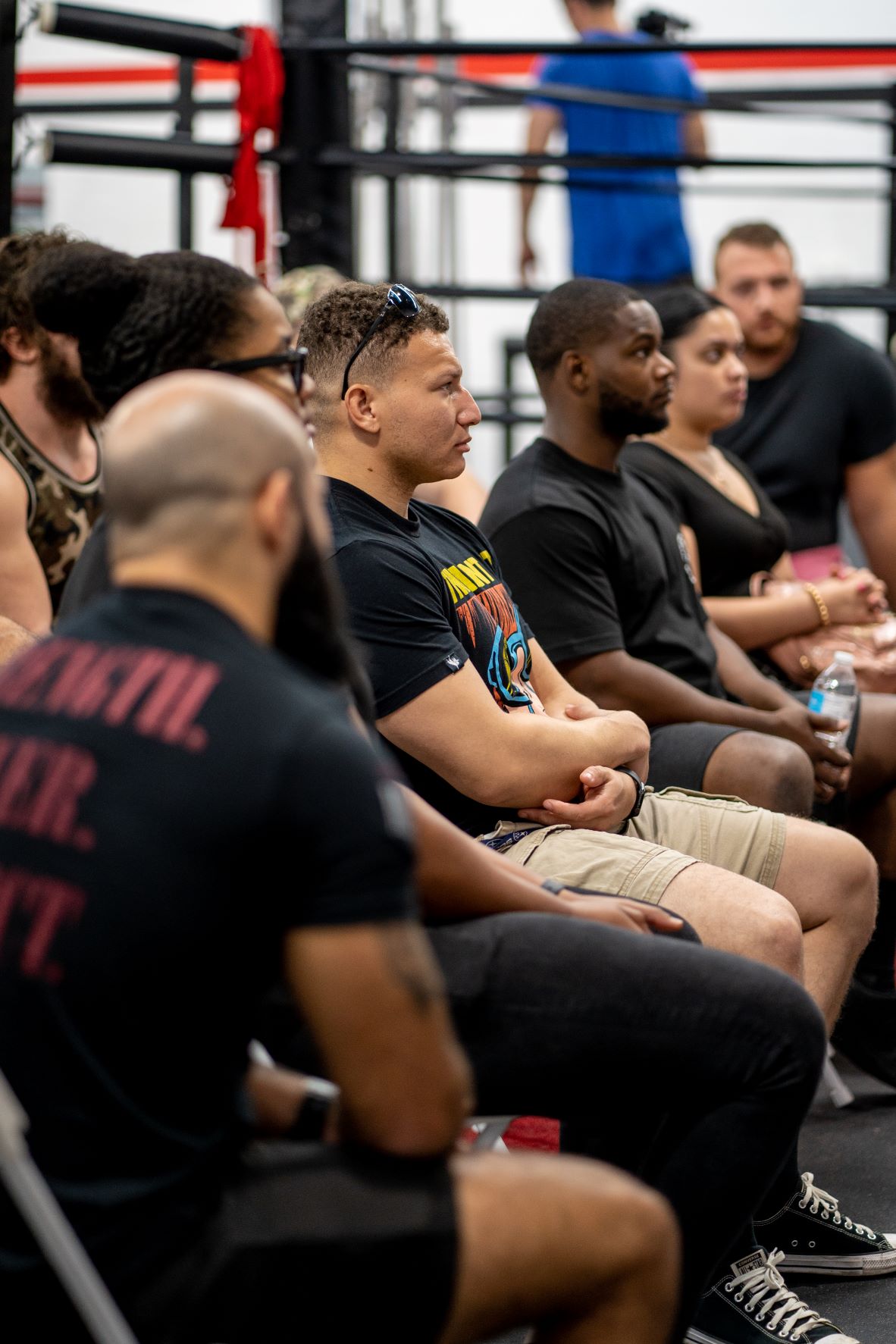 The morning began with a brief lecture segment where Andrey outlined each of the big three-- squat, bench, and deadlift-- from set-up to execution. He then proceeded to take a deep dive into the unique training methods that he implemented throughout his 27-year career.

But the most enlightening portion of the lecture was the Q&A that followed when Andrey fielded a wide variety of questions from the crowd. While many of his answers were met with nods in agreement, there were a few that widened some eyes.

When a lifter asked Andrey if he had any specific recommendations for stretching or go-to mobility drills, Andrey stated that he did not purposefully include or prioritize any stretching or flexibility work during his powerlifting career. He went on to explain how he believes stretching provides no additional benefit to a powerlifter and may actually increase their risk of injury.

Of course, this might sound a bit contrary to what many strength athletes do today. Everyone seems to have their 10-, 20-, 30-minute warm-up routine with lots of targeted mobility work, not to mention the common misconception that stretching is a cure-all for all training aches and pains.

Upon hearing Andrey’s take on stretching, I watched lifters look at each other with faces of utter disbelief. Perhaps this guy is onto something. Recent research does assert that both stretching and strength training are effective at increasing muscle flexibility (Afonso et al, 2021).

So if Andrey Malanichev doesn’t want to waste time cranking on his hamstrings or sitting in a prayer squat, maybe he’s better off just getting under the bar. The fact that this guy never had to stretch a day in his life while remaining injury-free for over two decades says a lot. Was he simply practicing all along what the research is just now starting to unveil? Perhaps.

Is he also insanely genetically gifted? That probably helps.

When asked about his top tips for maximizing recovery during a tough training block, Andrey’s response was simple: sleep and eat. How many hours of beauty sleep would this man strive for during prep?

As for his nutrition, Andrey denied paying close attention to tracking any exact macronutrients at any point in his career. For his weight class, the name of the game was Eat As Much As Possible. Andrey went on to explain that, as an alleged “hard gainer,” eating was like a full-time job for him; he would easily lose 10 to 20 kilograms of body weight in a matter of a couple of weeks if he wasn’t focusing on his calorie intake.

Getting a glimpse into the minds of champions is always a trip, isn’t it? As such, we had to pick Andrey’s brain on this subject.

It was clear that in order to accomplish all that he has done in his life, Andrey had to have tunnel vision; powerlifting was life, and everything else was put on hold. To him, it was simple-- any outside stressor that was not conducive to his goals to become (and remain) the best in the world was instantly out of the equation.

That ability to stay focused takes some serious mental fortitude and toughness, but Andrey made a point to share some of his weaker mental moments as well.

Interestingly enough, this gentle giant admitted that he was scared to death before each and every competition. He was not immune to the ever common tendency to compare himself to his competitors. Wow, that guy looks really strong. Wow, that guy’s opener was huge. Andrey also pointed out that his main driver to perform his best was the fear of failure. The idea of losing his title was enough to push him to new limits each and every meet.

But he said that once he laid his eyes and hands on the bar in the warm-up room, all of that fear dissipated. It was game over.

Once the lecture portion ended, Andrey’s eyes lit up as he excitedly asked all of the lifters to begin warming up with the squat for the practical portion of the seminar. We dispersed into the HYBRID gym, claiming monolifts in groups of two or three.

It is truly a beautiful sight to see when complete strangers bond over their love of iron. If you haven’t experienced it, you need to! 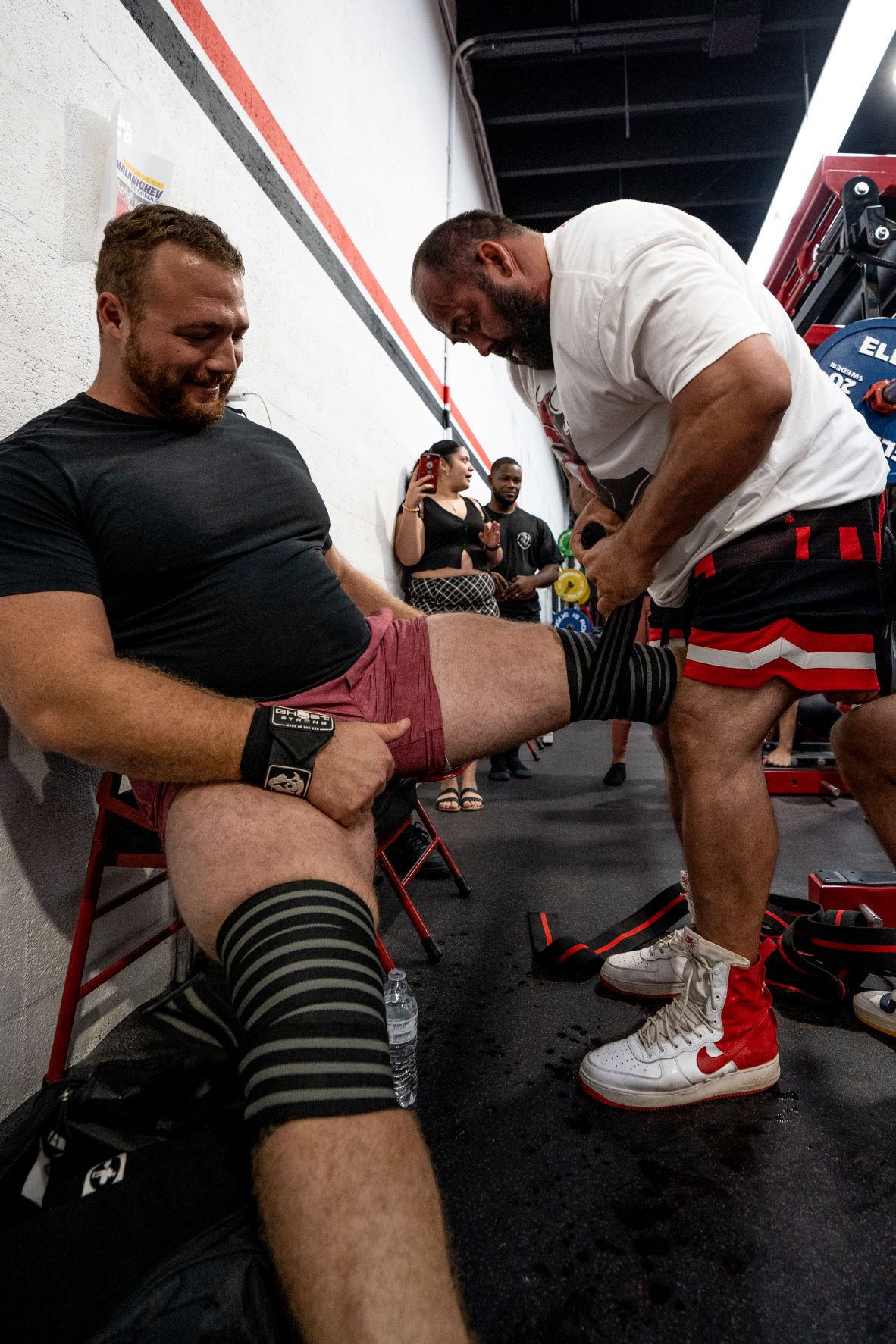 Andrey took great care and attention to detail as he walked around the room and observed each set from every athlete. His style of coaching and cueing was one of few words (perhaps in part because of the language barrier, but I have a feeling that wasn’t the only reason) and very calculated tactile feedback. It was concise and effective-- the mark of a great coach.

As an athlete who hasn’t been under a barbell in several months, I felt as though I had to dust off my squat a bit, if you will. But there’s nothing that a new pair of knee sleeves and a behemoth Russian world champion watching your every move won’t fix! Getting Andrey’s thumbs-up will undoubtedly be the highlight of my Squatober.

Coffee was chugged and high fives were given. Squat attempts got higher and cheers became louder. Shoutout to our friend Marcus for putting up an easy 280 kilogram squat using Andrey’s special knee wrapping technique! The Strong Saturday energy at HYBRID was in the air! 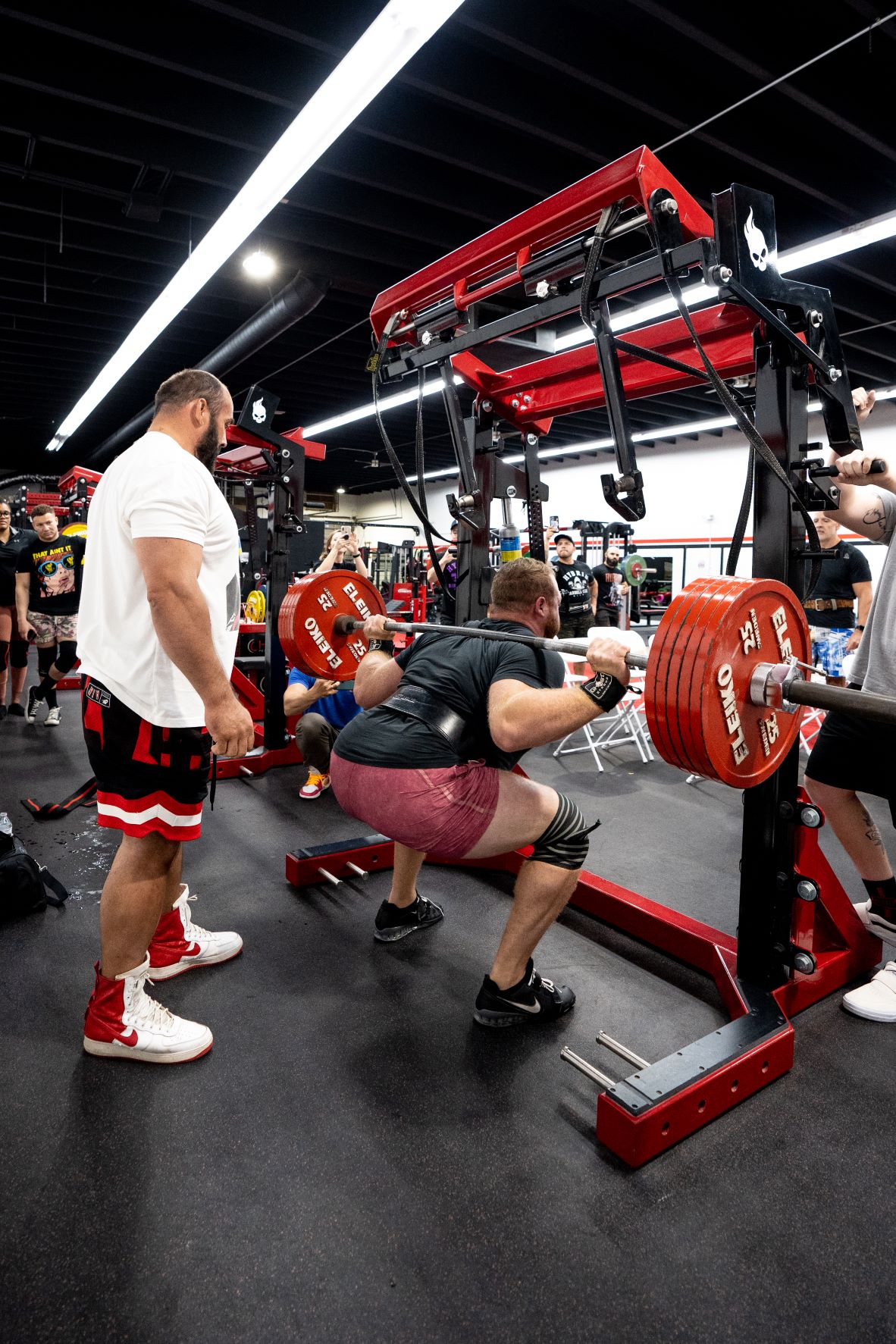 Remember, you can jump in on the fun again tomorrow from 9:00AM to 12:00PM to lift and learn with Andrey at HYBRID Open Gym. We can’t wait to see you there!

Special thanks to Andrey and his team, as well as Jeff (manager of HPM Gym), Simon (HYBRID Director of Training Services), and Nick (HYBRID Media Mastermind) for all of their help in organizing and executing this awesome event. We can’t wait to offer more events like this to give back to our incredible community.

Take your training and nutrition to the next level, get a personalized nutrition plan and a dedicated coach in your corner, helping you navigate your nutrition journey.